Stephen K. Boss – Far-Field Effects of Sea-Level Rise: We Are All Coastal

Stephen K. Boss, Professor of Environmental Dynamics and Sustainability in the Department of Geosciences at the University of Arkansas, presented 'Far-Field Effects of Sea-Level Rise: We Are All Coastal,' at 6 p.m. Wed., February 10, 2021, at the David and Barbara Pryor Center for Arkansas Oral and Visual History. Boss's lecture outlines the important potential impacts of sea-level rise on the United States Heartland.

Earth’s climate is warming and sea level worldwide is rising. As the Earth warms, so too does the ocean, causing the ocean volume to expand and raise sea level. A warming Earth melts mountain glaciers and polar ice caps, raising sea level. Rising sea level has immediate and obvious impacts to the coastal United States; however, sea level and its impacts reach deep into the United States Heartland remote from the coasts. 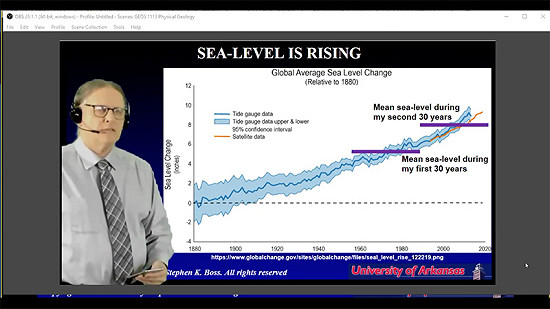