The David and Barbara Pryor Center for Arkansas Oral and Visual History in the Fulbright College of Arts and Sciences launched the 2022-23 season of Pryor Center Presents on Wednesday, Sept. 14, with a discussion by Robert Cochran and Dale Carpenter about their recently published book, Reporting for Arkansas: The Documentary Films of Jack Hill.  This event was cosponsored by the University of Arkansas Press.

Reporting for Arkansas  is a biography of journalist and documentary filmmaker Jack Hill, told in part through discussion of his many films. Hill's work for KAIT-TV in Jonesboro and his own production company, TeleVision for Arkansas, reflects a passion for Arkansas history and a determination to report on significant events and local perspectives.

The presentation featured Hill's 2004 film, Doing the Right Thing,  about the 1954 desegregation of the public schools in Charleston. Rev. Chaplain Sylvia Bell and Joe Ferguson, both of whom attended Charleston schools in 1954 and appeared in the film, joined Carpenter and Cochran onstage.

Carpenter taught broadcast journalism and documentary filmmaking at the University of Arkansas for a quarter century. His documentary films have been broadcast nationally on PBS and have garnered seven regional Emmy Awards. Carpenter was also a cameraman on many of Jack Hill's documentaries including Doing the Right Thing.

Cochran is professor of English and director of the Center for Arkansas and Regional Studies at the university. He is currently finishing a book on Charles Portis. Cochran edits the Arkansas Character series for the UA Press, of which Reporting for Arkansas  is the fourth volume. 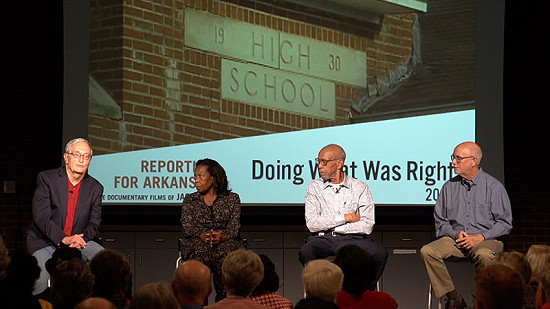