On November 8, 2018, Bob Cochran presented "Good News for Mr. Emerson: Kent Bonar Resurrects Thoreau in the Ozarks,” as part of the Pryor Center Presents lecture series. When Cochran was hard at work in 2017 on an introduction for a 1978 work of botanical taxonomy reissued with new illustrations by Kent Bonar, he found himself invited to deliver a lecture in Delhi for a meeting of academic specialists on writer Henry David Thoreau. Cochran said it seemed a stretch to him — the only connection to Thoreau was Bonar, who had been a dedicated admirer of the Walden author since junior high school. However, Cochran was soon surprised to realize the synergy that came from reading the words of Thoreau in tandem with watching the work of Bonar. As a result, Cochran said both the botanical taxonomy’s introduction and his lecture benefited. His Pryor Center talk explores that adventure.

Cochran is professor of English and director of the Center for Arkansas and Regional Studies at the University of Arkansas. He won a Guggenheim Fellowship in 1989, and has been awarded three Fulbright lecturing assignments: in Romania, Hungary and Korea. He’s been a biographer twice, writing Vance Randolph: An Ozark Life and Louise Pound: Scholar, Athlete, Feminist Pioneer. Two of his books, Our Own Sweet Sounds and Singing in Zion, are studies of Arkansas music. Two others deal with the arts — A Photographer of Note: Arkansas Artist Geleve Grice and Come Walk With Me: The Art of Dorris Curtis. Most recently, Cochran co-authored Lights! Camera! Arkansas!: From Broncho Billy to Billy Bob Thornton with his spouse, Suzanne McCray, and has served as editor of the “Arkansas Character” series published by the University of Arkansas Press, writing introductions for Kelly Mulhollan’s True Faith, True Light: The Devotional Art of Ed Stilley and An Arkansas Florilegium: The Atlas of Botanist Edwin Smith Illustrated by Naturalist Kent Bonar. 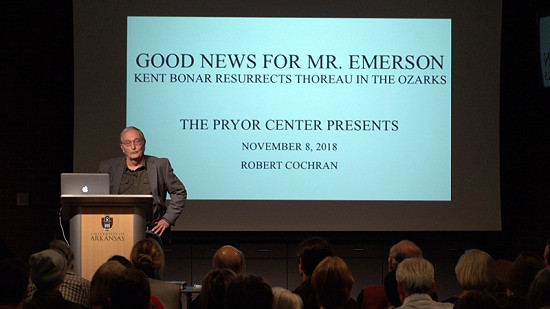