Earth's climate is warming and sea level worldwide is rising. As the Earth warms, so too does the ocean, causing the ocean volume to expand and raise sea level. A warming Earth melts mountain glaciers and polar ice caps, raising sea level. Rising sea level has immediate and obvious impacts to the coastal United States; however, sea level and its impacts reach deep into the United States Heartland remote from the coasts.

Boss holds a B.S. magna cum laude in geology from Bemidji State University, an M.S. in geology from Utah State University, and a Ph.D. in marine sciences from the University of North Carolina-Chapel Hill. From 2002–2015, he served as director of the interdisciplinary doctoral program in Environmental Dynamics at the University of Arkansas. Boss was the architect of sustainability curricula at the University of Arkansas and from 2010–2015 also served as director of Sustainability Academic Programs. He considers himself an interdisciplinary scientist and has ongoing research interests in natural resource dynamics, global agriculture, global fisheries, and equity and inclusion in the geosciences. Boss is a licensed Professional Geologist, an International Society of Sustainability Professionals Sustainability Associate, and a Fellow of the Geological Society of America. 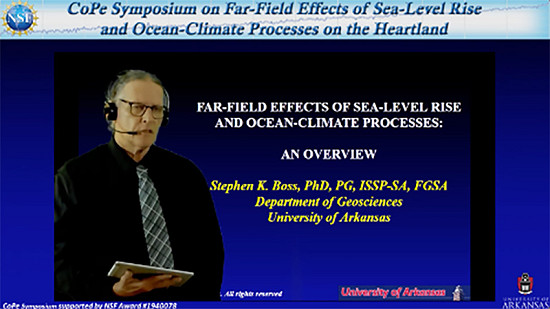