The second presentation entitled "The Potential Impacts of Global Warming on Mid-Latitude Cyclone Climatology and Precipitation" was delivered on September 28, 2022, by Timothy P. Eichler, an atmospheric scientist with NOAA’s Climate Prediction Center.

Eichler joined NOAA after working at the University of Arkansas. He received his Ph.D. in Atmospheric Science from Columbia University in New York. Eichler’s research focuses on the role of mid-latitude storm tracks in current and future climate, a topic for which he has produced numerous publications. Eichler has taught many courses in meteorology and climatology, and was awarded the William V. Stauder, S.J. Award for Excellence in Undergraduate Teaching in the Natural Sciences when employed at Saint Louis University. Eichler has presented at many conferences and helped organize NOAA’s Climate Diagnostic Workshop in St. Louis, Missouri. 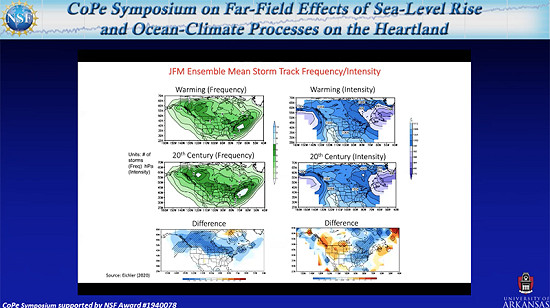