The third presentation entitled "Using the Köppen-Geiger Climate Classification to Model Past, Present, and Future Environmental Realms" was on October 19, 2022 by Robert V. Vohli, professor in the department of Oceanography & Costal Sciences at Louisiana State University in Baton Rouge, Louisiana.

Climate classification systems can be useful tools for relating atmospheric processes and impacts to other environmental features, including those that occur in coastal areas and impact people. The Köppen-Geiger (KG) classification system has been used for such purposes for over a century and has been modified several times, with the goal of conforming boundaries of climatic types to the realms of biomes. The availability of global, gridded data sets, including over marine areas, for several decades has allowed for the algorithms used to categorize KG climate types to be extended to the marine earth, thereby giving a truer global picture of the extent of various climate types and how they have changed over time. This development is particularly important in coastal areas, because the generation of types over the entire planet no longer leaves coastal areas on the fringe of the spatially interpolated KG type maps, likely enhancing accuracy.

This presentation summarized recent research that maps the KG system over the oceans, compared terrestrial vs. marine extents of the KG types, re-evaluated the extent to which the types correspond to biomes and soil orders over the terrestrial Earth, compared the extent of KG types today to those that may have existed at the time of the Last Glacial Maximum and mid-Holocene, and offered an approach for improving ensemble forecasts of KG types. 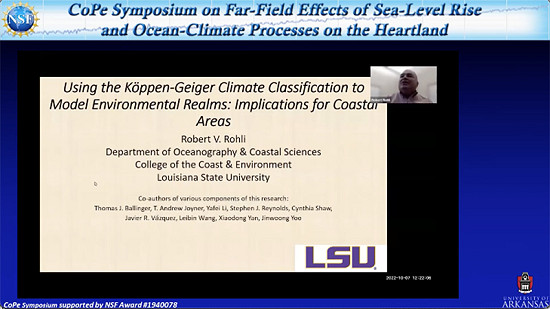