Dr. Anthony Lupo - Hurricane Ida: A Preview of the Future?

The fourth presentation entitled "Hurricane Ida: A Preview of the Future?" was delivered on October 26, 2022, by Anthony Lupo, professor of atmospheric sciences in the at the University of Missouri

As August moved into September in 2021, the ninth tropical cyclone of the Atlantic Region season developed in the Caribbean, moved across Cuba, and moved ashore over the southern Gulf Coast impacting Louisiana and Mississippi. The storm later brought tornadoes and heavy rains to the Northeast USA and the Canadian Maritimes. This storm resulted in almost 100 casualties and caused more than $75 billion in damage in the United States. In light of the recent strike on Florida by Hurricane Ian and other strong storms striking the US in the last few years, there is some concern that we may be experiencing an increase in strong tropical cyclones due to climate change

Lupo's talk examined recent research on trends in tropical cyclone frequency and strength and reviewed what the Intergovernmental Panel on Climate Change had said about recent research in tropical cyclone occurrences and what the future may hold. Lupo discussed how tropical cyclones move and why Ida may have slowed down before reaching shore. He also discussed the role of jet stream dynamics and speculated on how atmospheric blocking may have contributed to this slowing. Ida was unusual in that the storm retained its strength well inland, and Lupo addressed how the "brown ocean effect" may have been instrumental in this process.

Lupo earned a BS in meteorology at State University of New York at Oswego and an M.S. and Ph.D. in atmospheric science at Purdue University. As a three-time Fulbright Scholar in Russia, Lupo studied atmospheric blocking at the Russian Academy of Sciences in Moscow, and taught and conducted research at Belgorod State National Research University.

Lupo's research is in large-scale atmospheric dynamics and teleconnections, climate dynamics and variability, tropical meteorology, and climate change including modeling. He has nearly 160 peer-reviewed publications. Lupo served as an expert reviewer and contributing author to the Intergovernmental Panel on Climate Change Assessment Reports. 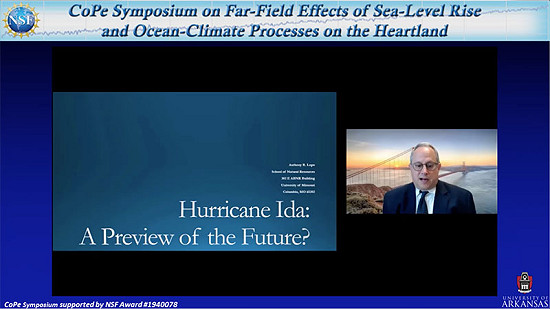