John C. Davis - From Blue to Red: The Rise of the Republican Party in Arkansas

John C. Davis, associate professor of political science and director of governmental relations at the University of Arkansas at Monticello, presented 'From Blue to Red: The Rise of the Republic Party in Arkansas' at 6 p.m. Wednesday, September 29, at The David and Barbara Pryor Center for Arkansas Oral and Visual History in the Fulbright College of Arts and Sciences. This presentation launched the 2021-22 Season of the Pryor Center Presents lecture series, which is part of the Pryor Center's expanded mission of education, research, and outreach.

In V. O. Key’s seminal work on Southern politics, he wrote this about the Democratic Party in Arkansas: "Perhaps in Arkansas we have the one-party in its most undefiled and undiluted form." Since that time, the state has been a fascination to state politics scholars and for those who study Southern politics, in particular.

Up until very recently, the peculiar situation of Arkansas politics had been that it remained, for the most part, a rather solid, one-party Democratic state even as other Southern states had begun the transition from Democratic Party control to reliably Republican. However, once the political landscape of Arkansas began to shift from Democratic to Republican Party dominance, the political balance of power in the Natural State changed in a dramatic way.

In coordination with The David and Barbara Pryor Center for Arkansas Oral and Visual History, Davis's study builds off decades of insightful academic research on the state’s politics and dives deeper into the dynamics of the modern Republican Party in Arkansas, the changing political behavior of the state’s voters, and how this sudden partisan shift has impacted policy-making. 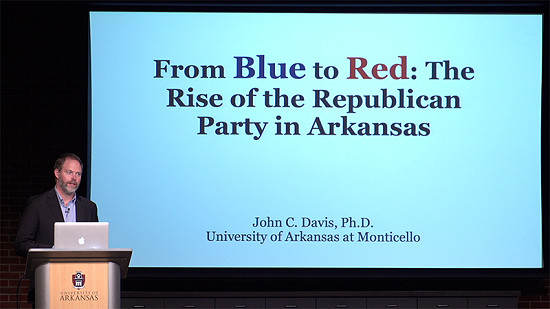