Elaine Now presented by Trent Bozeman and James White; Event is in person and via Zoom

In 1919, Elaine, Arkansas was the site of the deadliest racial confrontation in Arkansas history. This very small town in the Arkansas Delta—population 659 in 2019—has been documented by Trent Bozeman, a photographer and Master of Fine Arts graduate student in the School of Art at the University of Arkansas.

The Honors College and the David and Barbara Pryor Center of Arkansas Oral and Visual History presented an exhibition of Bozeman's photographs, Elaine Now, on Tuesday, April 12, followed by a lecture by Bozeman and James White, Elaine community leader and cofounder of the Elaine Legacy Center.

White detailed the Elaine Legacy Center's efforts to research, preserve and share oral narratives of the Elaine Massacre. Bozeman discussed his ongoing work to capture the contemporary world of Elaine, which began when he made weekend trips to the city, sharing his digital camera with children playing and hanging out.

"This project is a collective effort by me and the Black residents of Elaine," Bozeman said. "We've been working together for the last year and a half -- the kids took pictures too, and that's how I gained access to the community there. I met the parents, and there was a domino effect. Eventually, I was able to bring lights, shoot with film, and it's transformed into a photo camp."

"These photos belong to the town of Elaine," Bozeman emphasized. Citizens of Elaine are currently working on a new Civil Rights Museum, where Bozeman hopes to display photos taken by him and the children of Elaine. 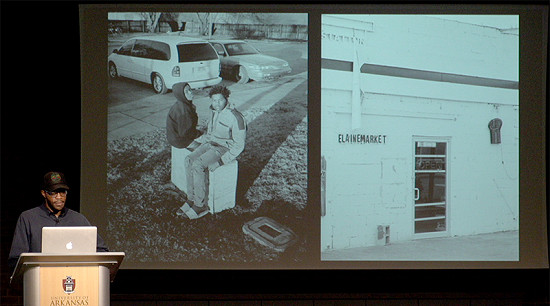