Shaun L. Gabbidon presented "Shopping While Black: Hidden Injustices in the Private Justice System" at 6 p.m. Thursday, October 22, at the David and Barbara Pryor Center for Arkansas Oral and Visual History in the Fulbright College of Arts and Sciences. This presentation was part of the Pryor Center Presents 2020-21 lecture series.

Gabbidon discussed the use of racial profiling to identify shoplifters in retail settings—also referred to as consumer racial profiling. The discussion included an overview of the private justice system that exists within retailers.

Drawing on his two decades of research on the topic, as well as his own experience as a security executive for a major retailer, Gabbidon provided the socio-historical context that fostered the development of the practice. In addition, Gabbidon reviewed the current knowledge base related to consumer racial profiling and discussed how retailers can identify—and begin to eliminate—racial profiling within their establishments.

Gabbidon has served as a fellow at Harvard University's W. E. B. Du Bois Institute for Afro-American Research and taught at the Center for Africana Studies at the University of Pennsylvania.

The recipient of numerous awards, Gabbidon was named a 2019 Fellow of the Academy of Criminal Justice Sciences, and recipient of the 2015 Julius Debro Award for outstanding service and the 2016 Outstanding Teaching Award, both from the Division on People of Color and Crime of the American Society of Criminology. 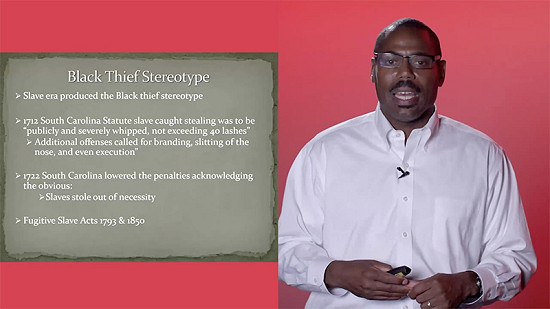