On March 28, 2019, Angie Maxwell presented “The Long Southern Strategy: How Chasing White Voters in the South Changed American Politics” as part of the Pryor Center Presents lecture series. Beginning with Barry Goldwater’s Operation Dixie in 1964, the Republican Party targeted disaffected white voters in the Democratic stronghold of the American South. To realign these voters with the GOP, the party capitalized on white racial angst that threatened southern white control. However—and this is critical—that decision was but one in a series of decisions the GOP made not just on race, but on feminism and religion as well, in what is called here the “Long Southern Strategy.” In the wake of Second-Wave Feminism, the GOP dropped the Equal Rights Amendment from its platform and promoted traditional gender roles in an effort to appeal to anti-feminist white southerners, and it politicized evangelical fundamentalist Christianity represented by the Southern Baptist Convention. Over time, that made the party southern, not in terms of place, but in its vision, in its demands, in its rhetoric, and in its spirit. In doing so, it nationalized southern white identity, and that has changed American politics.

Maxwell is the Director of the Diane Blair Center of Southern Politics and Society, an associate professor of political science, and holder of the Diane Blair Endowed Professorship in Southern Studies at the University of Arkansas. Maxwell received her Ph.D. in American Studies from the University of Texas, and her research and commentary have been featured in Slate and on MSNBC’s “The Reid Report” and “The Cycle.” Maxwell is the author of The Indicted South: Public Criticism, Southern Inferiority, and the Politics of Whiteness (UNC, 2014) which won the V. O. Key Award for best book in southern politics and the C. Hugh Holman Honorable Mention for best book in southern literary criticism. She is the co-editor of Unlocking V. O. Key, Jr. (Arkansas, 2011), The Ongoing Burden of Southern History (LSU, 2013), and The Legacy of Second Wave Feminism in American Politics (Palgrave, 2018), and editor of the new edition of Ralph McGill’s A Church, A School (South Carolina, 2012). Her recent articles have appeared in Southern Cultures, Presidential Studies Quarterly, the Journal of Black Studies, American Behavioral Scientist, Race and Social Problems, Politics, Groups, and Identities, Social Science Quarterly, Virginia Quarterly Review, Vox, and Huffington Post. Her new book, The Long Southern Strategy will be published in June by Oxford University Press. 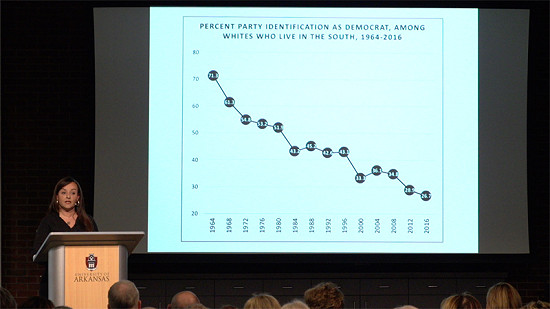