On October 24, 2018, Janine A. Parry presented "From the Bluest of the Blue, to the Reddest of the Red? Measuring, Comparing, and Explaining Arkansas’s Partisan Earthquake,” as part of the Pryor Center Presents lecture series. Parry is professor of political science at the University of Arkansas and has directed the Diane D. Blair Center of Southern Politics and Society’s annual Arkansas Poll since its inception in 1999. She teaches courses at the introductory through graduate level on topics including American National Government, Politics on Film, Arkansas Politics, Gender and Politics, and more, and has earned numerous teaching honors, including the Baum Award for Excellence in Teaching in 2016. From 2008-2011, she co-directed the Teaching and Faculty Support Center at the University of Arkansas, and from 2012-2014 she served as the elected chair of the Campus Faculty/Faculty Senate. As the author of two books and dozens of articles and chapters on subjects relating to state politics, public opinion, and gender and politics, she frequently provides analysis to media outlets, including NPR, CNN, the BBC, the New York Times and more. 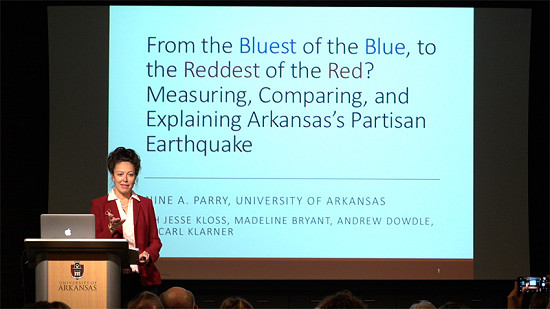