Prelude to War: A Film Screening and Discussion

The University of Arkansas Libraries Special Collections held a film screening of Prelude to War  at the David and Barbara Pryor Center for Arkansas Oral and Visual History at 7 p.m. Thursday, November 16, 2022. Frank Scheide, professor in the Department of Communication, introduced the movie and moderated a Q & A afterwards.

This event was held as part of the programming associated with the Americans and the Holocaust  traveling exhibition, on display in Mullins Library at the University of Arkansas from November 10, 2022, through December 8, 2022. Americans and the Holocaust:  A Traveling Exhibition for Libraries is made possible by the United States Holocaust Memorial Museum and the American Library Association. Americans and the Holocaust  was made possible by the generous support of lead sponsor Jeannie & Jonathan Lavine. Additional major funding was provided by the Bildners — Joan & Allen z”l, Elisa Spungen & Rob, Nancy & Jim; and Jane and Daniel Och. The Museum's exhibitions are also supported by the Lester Robbins and Sheila Johnson Robbins Traveling and Special Exhibitions Fund, established in 1990. 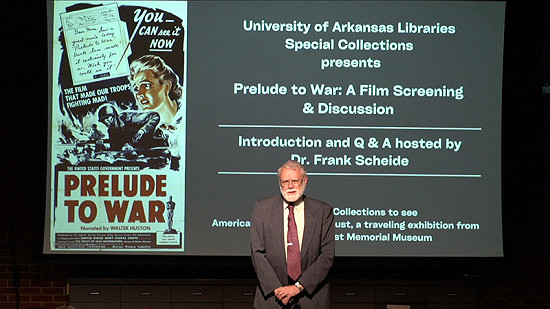