Recovering Our Land: The Osage Nation Pursuit of Self-Determination

Dr. Jean Dennison, a member of the Osage Nation, Associate Professor of American Indian Studies at the University of Washington and Co-director for the Center for American Indian and Indigenous Studies, presented "Reclaiming Our Land: The Osage Nation Pursuit of Self-Determination" at 6 p.m. Friday, April 15, at the David and Barbara Pryor Center for Arkansas Oral and Visual History.

Dennison spoke about revitalization and built on her work on Osage politics. She has published extensively in journals such as Visual Anthropology, PoLAR, American Indian Quarterly, the American Indian Culture and Research Journal, American Ethnologist,  and The Native American and Indigenous Studies Journal  and is author of Colonial Entanglement: Constituting a Twenty-First-Century Osage Nation  (UNC Press, 2012). 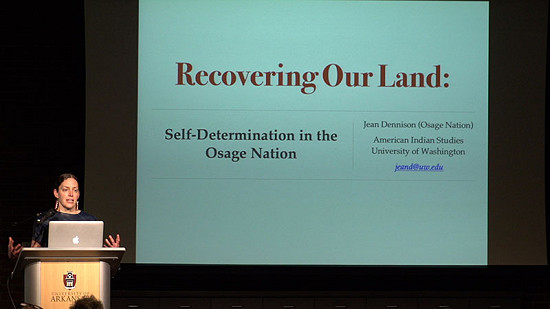