The Pryor Center Presents lecture series continued at 6 p.m. Tuesday, Dec. 6, with Lindsley Armstrong Smith and Stephen A. Smith as they discussed their new book, Stateswomen: The Centennial Celebration of Arkansas Women Legislators, 1922-2022, at the David and Barbara Pryor Center for Arkansas Oral and Visual History in the Fulbright College of Arts and Sciences.

The book features concise and carefully-researched biographies of all 146 Arkansas women legislators, situating their political activity and public service within the historical and ongoing expansion of the role of women in the public sphere. The authors discussed the book, the researching of it, the symbolic and substantive influence demonstrated in the book’s biographies that representation by these women leaders entails, shared stories from some of the legislators through video biography excerpts from the Pryor Center collections, highlighted the obstacles and opportunities women in Arkansas experienced and their contributions to Arkansas, and shared some of the joys and frustrations of researching women’s history.

Smith holds a Ph.D. from Northwestern University and is professor emeritus of communication at the U of A. He was a member of the Arkansas House of Representatives, 1971-1974; vice president of the Arkansas Constitutional Convention; chief of staff to the Arkansas attorney general; and executive assistant to Governor Bill Clinton. Smith's publications include nine books and more than 60 book chapters and journal articles. 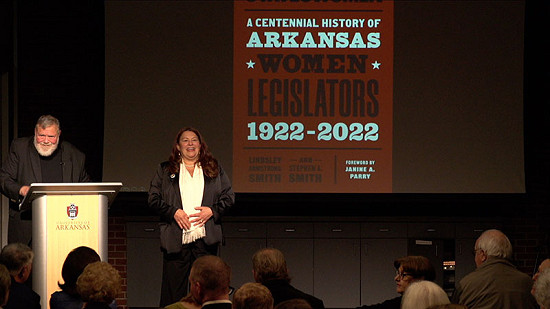