Kevin Strait, museum curator at the Smithsonian's National Museum of African American History and Culture, presented "A People's Journey – Curating African American History and Culture in a National Museum" at 6 p.m. Wednesday, November 6, at The David and Barbara Pryor Center for Arkansas Oral and Visual History in the J. William Fulbright College of Arts and Sciences. This presentation was part of the Pryor Center Presents 2019-20 lecture series and was sponsored by the Department of Communication and the Department of History.

Strait's 45-minute talk focuses on the curatorial aspects of museum work, providing insight into specific acquisitions, objects and stories, and the creation of a National Museum focused on African American history and culture.

Strait began working in 2010 in the Office of Curatorial Affairs on the research, development and acquisition of objects for several of the museum's permanent exhibitions including the interpretive spaces of the Sweet Home Café, Musical Crossroads and the Power of Place. He oversees collections related to segregation, 20th century political and social history and popular culture. Strait is developing an exhibit on Afro-Futurism, scheduled to open in 2022.

Strait is a graduate of Wesleyan University and received his Ph.D. in American Studies at the George Washington University. 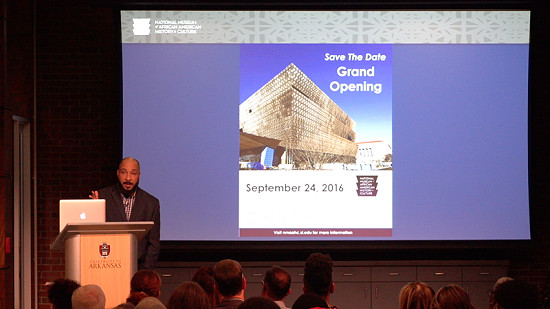