Natalie Todak, assistant professor in the Department of Criminal Justice at the University of Alabama at Birmingham, presented 'Body-Worn Cameras and Police Accountability: High Hopes, Lackluster Evidence' at 6 p.m. Wednesday, December 3, at the David and Barbara Pryor Center for Arkansas Oral and Visual History in the Fulbright college of Arts and Sciences. This presentation was part of the Pryor Center Presents 2020-21 lecture series.

Beginning with the death of Michael Brown by a Ferguson, Missouri, police officer in 2014, a tragic string of high profile and controversial deaths of black men by U.S. police spurred a nationwide legitimacy crisis, characterized by public concerns about systematic racism and use of excessive force.

Amidst this crisis, body-worn cameras emerged as a suggested tool for improving police accountability systems, increasing public trust in police, and reducing disparities in criminal justice outcomes. However, the research on police body-worn cameras has not largely engaged with these hypotheses.

In this talk, Todak covers the existing research on police body-worn cameras. In doing so, she highlights the problematic disconnect between public expectations and reality and calls for an increased focus on how the technology can better contribute to police reform.

Making use of qualitative and mixed methods, Todak's main research areas are police technology, diversity, and community relations. Her doctoral dissertation was the first study to evaluate tactics used by police officers to de-escalate encounters with citizens. In partnership with Routledge Press, she is writing a book on the underrepresentation of women in law enforcement supervision and leadership.

Todak is published in leading journals such as Criminology, Criminology and Public Policy, Journal of Experimental Criminology, and Police Quarterly. 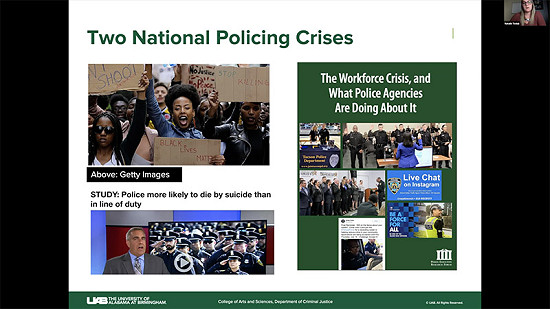