Siva Vaidhyanathan, Robertson Professor of Media Studies and director of the Center for Media and Citizenship at the University of Virginia, discussed his book Antisocial Media: How Facebook Disconnects People and Undermines Democracy at 6 p.m. Wednesday, April 10, at the David and Barbara Pryor Center for Arkansas Oral and Visual History in the J. William Fulbright College of Arts and Sciences. This presentation was the final event in the Pryor Center Presents 2018–19 lecture series and was cosponsored by the Diane D. Blair Center of Southern Politics & Society, Department of Communication, and Clinton School of Public Service.

In Vaidhyanathan's book he says that if you wanted to build a machine that would distribute propaganda to millions of people, distract them from important issues, energize hatred and bigotry, erode social trust, undermine respectable journalism, foster doubts about science, and engage in massive surveillance all at once, you would make something a lot like Facebook. In his lecture Vaidhyanathan explains how Facebook's mission went wrong.

Vaidhyanathan directs the Center for Media and Citizenship at the University of Virginia, which produces a television show, a radio program, several podcasts, and the Virginia Quarterly Review magazine. Vaidhyanathan is the author of several books and has written for many periodicals, including The New Yorker, The New York Times, The Chronicle of Higher Education, and Washington Post. He has appeared on news programs on BBC, CNN, NBC, CNBC, MSNBC, and ABC, has appeared in several documentary films, and is a frequent contributor to public radio programs.

After five years as a professional journalist, he earned a Ph.D. in American Studies from the University of Texas at Austin. Vaidhyanathan has also taught at Wesleyan University, the University of Wisconsin at Madison, Columbia University, New York University, McMaster University, and the University of Amsterdam. He is a fellow at the New York Institute for the Humanities and a Faculty Associate of the Berkman Center for Internet and Society at Harvard University. He was born and raised in Buffalo, New York, and resides in Charlottesville, Virginia. 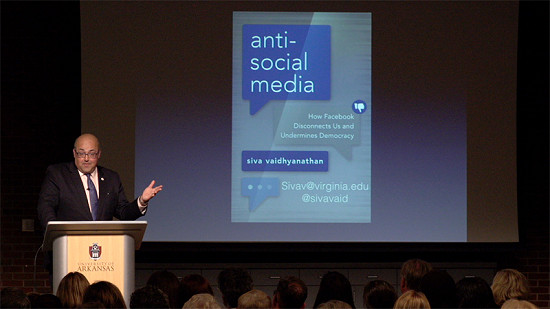