A Symposium on the Elaine Massacre - Robert Whitaker - Discovering a Hidden Past: How Do We Know That a Massacre Occurred?

Robert Whitaker is a journalist and the author of five books. His book on the Elaine Massacre, On the Laps of Gods: The Red Summer of 1919 and the Struggle for Justice that Remade a Nation—published in 2008—won the Anthony J. Lucas work-in-progress award, and was named by the San Francisco Chronicle as one of the best non-fiction books of 2008. The New York Times credited Whitaker with paring down extraneous material and placing the massacre and the Supreme Court decision in their full legal and historical context while, at the same time, reviving the story of a great African American lawyer, Scipio Africanus Jones. Whitaker is a former Knight Science Journalism Fellow at the Massachusetts Institute of Technology and a former fellow of the Edmond J. Safra Center for Ethics at Harvard University. 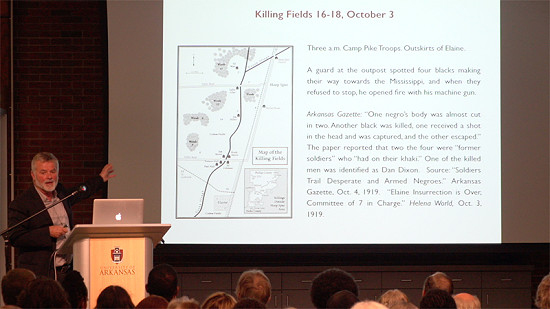