From Juke Joints to Jacobean Literature: Arkansas Vernaculars and the Creation of Southern Fiction

What do Arkansas singers Levon Helm and Lucinda Williams have to do with Southern fiction or Shakespeare? What conduits can be traced from the juke joints that housed Sonny Boy Williamson and Lead Belly to the hallowed halls of the University of Arkansas? Finally, how does vernacular music or rock and roll relate to what we think of as Southern fiction today?

Florence Dore came to the David and Barbara Pryor Center for Arkansas Oral and Visual History on Monday, Sept. 19, to answer these questions in a discussion that was part lecture, part reading and part song. Dore was joined by guitarist Mark Spencer of the seminal Americana band Son Volt.

Dore is a singer/songwriter as well as an academic whose published works focus on the blues, rock, race in popular music, and other topics. She is the author of Novel Sounds: Southern Fiction in the Age of Rock and Roll  (Columbia University Press 2018) and the editor of The Ink in the Grooves: Conversations on Literature and Rock 'n' Roll  (Cornell University Press 2022).

As professor of English at the University of North Carolina, Dore teaches in both the creative writing and literature programs. She has held fellowships at New York University, the National Humanities Center and the Institute for Arts and Humanities at UNC. A member of the steering committee for Post45, a collective of scholars working on American literature and culture since 1945, Dore was also a founding co-editor for the Post45 Book Series at Stanford University Press. During the pandemic, she created and acted as co-executive producer for Cover Charge: NC Musicians Go Under Cover to Benefit Cat's Cradle,  a benefit compilation record that came in No. 1 in compilations on the Billboard charts. She has organized two public conferences on rock and literature, in 2017 at the National Humanities Center with Carolina Performing Arts and at the Rock and Roll Hall of Fame in 2011.

Dore sits on the advisory board for the Institute for Bob Dylan Studies at the University of Tulsa's Bob Dylan Archive. Her second album, Highways and Rocketships  (Propeller Sound Recordings) was produced by Don Dixon and Mitch Easter and features members of the legendary dB's, Son Volt and Steve Earle's band. She is currently touring on both Highways and Rocketships  and The Ink in the Grooves  as part of her traveling public humanities program called "Ink in the Grooves Live."

This event was hosted by the Pryor Center and sponsored by the U of A Humanities Center, African and African American Studies Program, Center for Arkansas and Regional Studies, and Department of English. 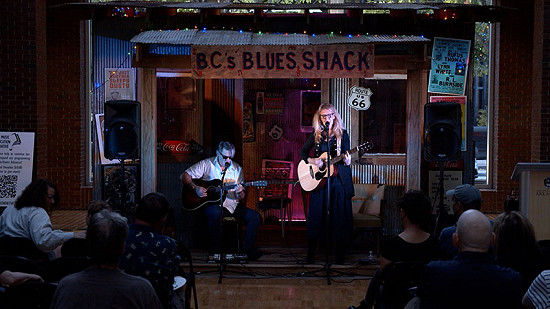